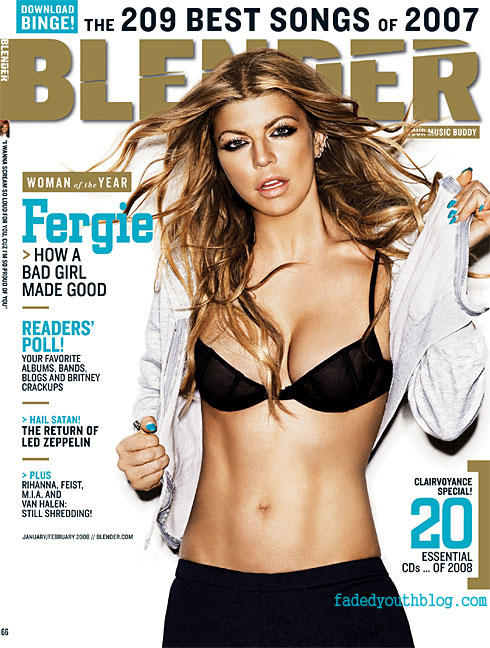 Fergie has had her breakout year in 2007 and Blender is recognizing her many accomplishments by naming her the woman of the year, and she is the cover girl for the January/February 2008 issue.

She delivers a super sexy cover that is sure to sell many issues for the magazine. Fergie definitely has a negative following that are not fond of her looks or style, the ones that obviously prefer the typical Hollywood look and won’t accept anything different, but Fergie has broken out to become one of the most successful stars this year and is making big money outside of her solo career AND ongoing career with the black eyed peas as she’s signed numerous endorsement deals with everyone from Candies, Motorola, Verizon Wireless, Kipling, and MAC starting early in 08 – not to mention her movie roles most recently in Poseidon and Planet Terror.

So we’re sure the negative people are drowned out by Fergies constant successes, including magazine cover after magazine cover. Unfortunately the cover is all we’ve been able to get our hands on so far, and while it is jaw dropping hot, and a great shot of her rather large boobs and sexy body, we want to get more pics from this shoot ASAP and when we do, we’ll post them here for those out there that think Fergie is on fire in this shoot.

***UPDATE*** We’ve got the hot collection of sexy pics from Fergie’s Blender shoot, and here they are: