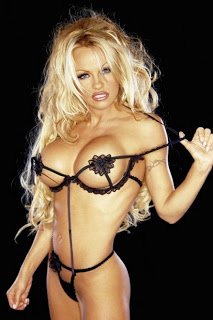 A few months ago an episode of “The Girls Next Door” reality show aired highlights of Hugh Hefner’s birthday which featured his birthday cake being brought out by Pamela Anderson, who just happened to be butt ass naked. Yeah, not just topless with her big fake tits out everywhere, but as in totally nude, ass, vagina, everything.

Of course this show airs on “E!” channel which means Pamela’s goods were blurred out and we could only sit back and imagine Pamela’s nude birthday surprise, and maybe even wonder if Pam was truly naked or if she at least had bottoms on and they just put up a blur to make it look worse than it was.

But now, the uncensored video has been found and we can confirm it was just as bad as it looked; totally uncensored naked Pamela Anderson in front of a bunch of people (including Hefner’s other favorites like Kendra Wilkinson and Holly Madison) prancing around not caring who saw. Hey, if she doesn’t care that she’s a mother and her kids are going to see this one day if they haven’t already, then neither do we!

Pam is still hot, her tits are still big and fake, her body hasn’t aged a bit it doesn’t seem, so hey why not prance around nude? It’s good to see stuff like this coming out, because reality shows that feature blurred out nudity just suck and it’s time to give us what we really want to see, like Pamela Anderson’s shameless nude birthday bash: