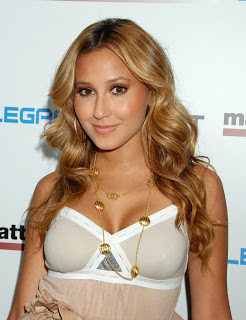 Well Disney has done it again….one of their lovely young role model types that they like to cast in their movies has suddenly found naked pics of herself all over the net.

High School Musical star Vanessa Hudgens made it trendy, and now Cheetah Girl Adrienne Bailon has followed suit as pics of her ass have hit the net with the possibility of more on the way. It seems her laptop went missing at an airport, and someone blackmailed some money out of the deal to give it back, which they did, but not before taking some nude pics from it that apparently Bailon took for her boyfriend Rob Kardashian, WHICH brings me to the next angle on this scandal: the Kardashian connection.

Yes, Adrienne Bailon is with Rob Kardashian who of course is Kim Kardashian’s brother, and of course Kim Kardashian is a pioneer in the world of “Oh no naked pics/video of me got stolen.” So it seems Adrienne is already following the Kardashian family way and taking pics of her Kardashian sized ass to join in on the fun.

So there goes the image of the nice girl who started out in 3LW, the junior high music group from a few years ago who then went squeaky clean and formed the Cheetah Girls as an actual group after the success of the movies, to now just being a freak who gets down and dirty just like her soon to be sister in law Kim.

So now that we’ve seen her true colors, Disney is probably getting bombarded with complains and such just like Vanessa Hudgens got, but hey, what’s done is done, time for us to see the rest of these pics and then she can just throw her hands up and join in like Kim did by settling on releasing her sex tape and then just getting naked and doing Playboy. Adrienne is on the right path, just follow Kim and get naked more.