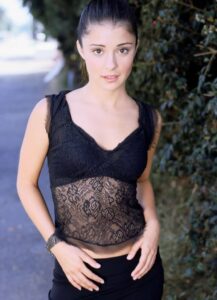 There is no better way to start the week than with a celebrity nudity post we never thought we would be writing.  I would have to say 1999 was the first time I really took notice of Shiri Appleby when  she played “Liz Parker” in the new show “Roswell.”  It was pretty clear from the get-go that Shiri was going to be the super nice girl from a popular TV show that we would never ever see naked.

Fast forward to almost 14 years later, and the show “Girls” is making headlines for its realistic and some would say (not us!) gratuitous sex scenes.  The show’s creator Lena Dunham also stars in the show and is the center of much of the show’s controversy.  Lena isn’t exactly a stick-figured model that you might normally see doing nude sex scenes, but she is taking it all off and raising some eyebrows in the process.

Enter Shiri Appleby.  We read a few months ago that Shiri would be going topless in “Girls” for the first time in her career and it was a huge surprise to read it would be happening since it seems like she’s barely even taken a sexy pic during her career.  What we had in mind was a quick boob flash or maybe a sex scene with a peek at her nipples at best.  What we got is a raunchy sex scene with an explicit ending that no one could see…..coming.

This scene has to be considered very realistic since the guy is acting as anyone else would in real life if they realized Shiri Appleby was at their house and wanted to have sex with them.  There’s no dramatic music or fake motions here, just some hot raw sex.  He takes control by bending her over, pulling her panties down, and eating her out from behind (vagina or ass isn’t clear, but WOW either way.)  She doesn’t seem comfortable with this, so she tries telling him she hasn’t showered, but he’s just fine with that too.  He then proceeds to bang her doggy style, which lasts about as long as any other average person that might get to have sex with Shiri Applebee.