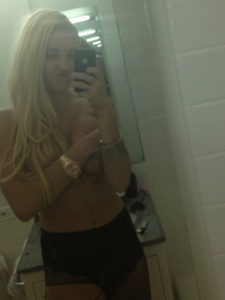 Yes, we are apparently on a Twitter meltdown watch according to some. So actress Amanda Bynes has recently been posting some rather odd pics of herself doing things like shaving part of her head and making crazy faces, which has caused some to believe she’s on drugs or something and needs help. It’s been pretty entertaining to watch her deny being crazy and then going off on people like Jenny McCarthy for saying she needs help. Honestly, we really didn’t care much about all this…UNTIL Amanda started getting naked.

Yes, that’s right. Part of his so-called “meltdown” has been Amanda Bynes taking pics slowly showing more and more skin and posting them on Twitter. First, it was “WOAH big boobs in a bra,” then “Holy wow now she’s topless and covering her boobs with her arm!” and now finally in the latest pic she tries covering her big tits with her hair, but they come peeking out for a nice nipple shot. We didn’t even realize she had such big tits, but if she has ’em why not show ’em! She’s definitely come a LONG way from Nickelodeon! This goes to show, all you have to do is show a little boob to get some attention, at least here at NSFW celebs!

Call it a meltdown if you will, but we have no problem with a celeb wanting to show her topless boobs online and gaining popularity due to it. Maybe she just wants more followers; it’s working. Seriously, we hope she just enjoys the attention and isn’t as strung out as she seems. As it stands now, it looks like the more people say she’s crazy the more she is going to take off! Be sure to keep up with what she does next by following Amanda on Twitter @AmandaBynes.