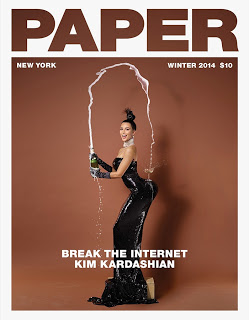 Kim Kardashian is a certifiable legend here at NSFW celebs; she has don’t just about everything we could possibly ask for and she just keeps on delivering.  Seriously, she has arguably the most infamous sex tape of all time, then posed nude in Playboy, and just a couple of months ago had full frontal nude pics leak online as part of “The Fappening.”  In almost all of these situations, Kim has either claimed she didn’t want the content released or in the case of Playboy didn’t want to show as much as she did; but this latest photo shoot may be a sign that Kim is finally giving in to the fact that most of us only care about her if she’s naked.

In this new photo shoot from “Paper” Magazine, the intention is to “break the Internet” by showing Kim Kardashian’s big ass in all its glory…mission accomplished.  This shoot makes us think of the shoot Kim did for W Magazine where her ass as well as her topless boobs were on display and only covered by body paint; then on one her many reality shows, Kim acted upset that so much was shown as if she thought her “good parts” wouldn’t be visible in the actual magazine….right.

Well there’s no question that Kim is flaunting her ass for “Paper” as the first pic sends the message that Kim’s ass is so big you can sit a champagne glass on it….or maybe it’s that her ass is a great target if you want to shoot….champagne on it.  Anyway, pic number one’s message = Kim Kardashian has a big ass.

Now on to the main event aka pic number two.  No more teases here, just Kim Kardashian pulling her dress down and giving us the full moon shot of her ass.  Yes it’s still huge and still seems like it doesn’t even fit the rest of her body, so the speculation will go on forever as to whether Kim’s ass is even real or fake….but we like that she’s giving us more chances to examine it and compare as the years go on.

It’s good to see Kanye hasn’t locked Kim down yet since maybe this married might finally stick for Kim (for now anyway) and we thought because of that it might change her ways, but nope, deep down Kim Kardashian knows she needs to keep getting naked if she wants to stay relevant.  We will help her cause by continuing to post on her any time she is nude, whether via “leak” or via magazine shoots like this where Kim kindly invites us all to have a look at her famous ass: 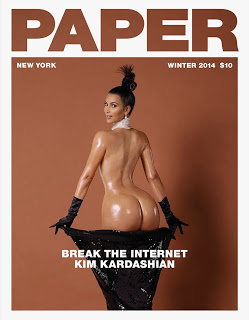