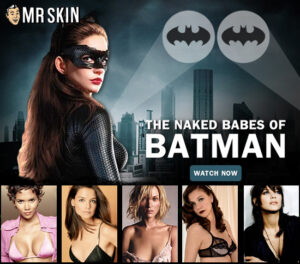 As the latest Dark Knight film “The Batman” is making headlines destroying its competition at the box office, it got us thinking about all the hot women that have accompanied “The Caped Crusader” on screen and how many of them have great nudity history.

Since the first Batman series and movie were on screens in the ’60s, there seems to rule that the Batman character has to have sexy women either by his side or opposing him. It’s a sentiment that has carried on  from Julie Newmar’s “Catwoman” all the way to Zoe Kravitz’s version of the same character in “The Batman.” Along the way, the list of sexy women that have been naked on screen reads like a who’s who, so narrowing it down to ten choices was a challenge.

So here are our picks for the ladies of Batman that have gone nude, along with the role they played in their respective movies:

7. Zoe Kravitz (plays Catwoman in “The Batman”) in “The Road Within”

6. Drew Barrymore (Played “Sugar” in “Batman Forever) in “Doppleganger: The Evil Within”

4. Kim Basinger (played Vicki Vale in “Batman”) in “The Getaway”

For more of the nude ladies of the Dark Knight, check out the full Naked Babes of Batman Playlist!