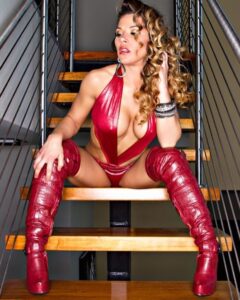 Mickie James is undoubtedly one of the most respected wrestlers in pro wrestling today. What first landed her here in our NSFW Celebs world was the rather interesting road it took Mickie to achieve her fame.

While Mickie James remains active in the ring, she also shows us that she’s one of the hottest MILFs in wrestling and doesn’t seem to be ashamed of that fact judging by many of the posts she makes on social media.

**This post is courtesy of our friends at Celebrity Sin, be sure to follow them on Twitter @Celebrity__Sin** Since I could walk, I’ve been saying my prayers and eating my vitamins. Sitting in front of the TV
Read More
2017 has been a record-breaking year when it comes to celebrity nude pic leaks but even after all we’ve seen this year, it’s amazing to see a leak from someone we’ve been posting on since the very
Read More
By far our most popular post to date is our post on the Mickie James nude pics from prior to joining WWE.  The pics were from Legshow Magazine and featured Mickie under the alias “Alexis Laree” in
Read More
Once again our readers have spoken, and they love the wrestling divas! Therefore we’ve got some more great rare nakedness from another WWE Diva, and this time it’s surprisingly Mickie James! We say surprising, because many of
Read More