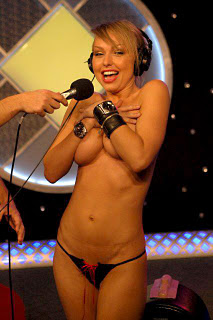 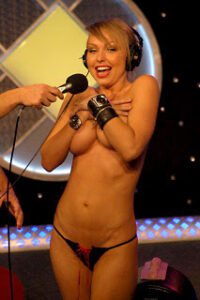 You can’t help but be interested in a good controversy, especially when it involves a hot model that’s won Maxim contests, done Playboy, and is a Wrestling interviewer all in one.

Back in November, Leticia Cline appeared on the Howard Stern show on Sirius Satellite Radio. Like many other times on the show, Stern made things as sexual as possible and Leticia was willing to go along with just about every request Stern had – first taking off her shirt, then going totally topless and down to her panties, and then getting her to ride his famous Sybian vibrator…thing. Leticia obliged and took a naked ride on the Sybian, and even had an orgasm according to her.

Controversy has followed ever since her appearance, with some claiming Cline’s appearance was too much for Stern even. Rumors of Stern’s staffers saying her crass language and having “orgasms all over the studio” were just too much…..hmm, last we checked we thought that’s what Stern’s show was all about! Anyway, Cline reportedly lost her job with GNCC motocross racing over the Stern appearance and it’s rumored her dad won’t even talk to her…wow, touchy people.

After seeing the appearance, WWE should definitely use this girl; she’s got experience from TNA as their backstage interviewer and she’s definitely the “Outgoing” type – she was also a runner up in Maxim’s “Hometown Hotties” contest so her name (and body) are definitely out there.

Leticia called in to Howard Stern’s show 2 weeks later, and claimed she had no regrets for anything she did on the show…awesome! So let’s relive the great moments with a few captures from her Stern appearance….