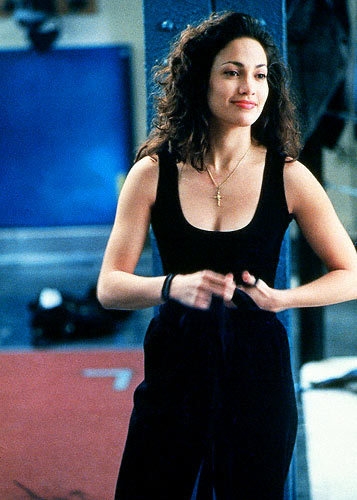 This edition of “NSFW Classic Nude Scenes” feature the one and only J-lo, Jennifer Lopez. Now in my previous post on Salma Hayek’s nude scene from Desperado, I mentioned that Desperado was the first time I’d seen Salma Hayek period. With Jennifer Lopez things were a little different. I really didn’t notice J-lo until the movie U-turn, which was a pretty hot role for her in itself, but of course she went on to become a huge music star and now is a top of the line celeb.  It wasn’t until she really started getting big in music that I discovered she’d been naked in Money Train, so of course I had to check it out.

After seeing her become “J-lo” on the music scene for a couple of years, and she was all over the media for being hot and of course having a big ass; to find that she had indeed went naked in Money Train before she was anybody was a great find.

Reports over the years have stated she of course regrets the scene, but oh well, too late, it’s here for us to enjoy forever. In the scene, Jennifer gets it on with Wesley Snipes and he’s fondling her tits. We get some pretty good shots of her boobs, but sadly no ass action. This scene may not be the best actual sex scene ever, but I think it’s more the fact that we get to see a celeb who now is all high and mighty, do what she had to do back in the day to make a name in Hollywood, which meant topless sex with Wesley Snipes: