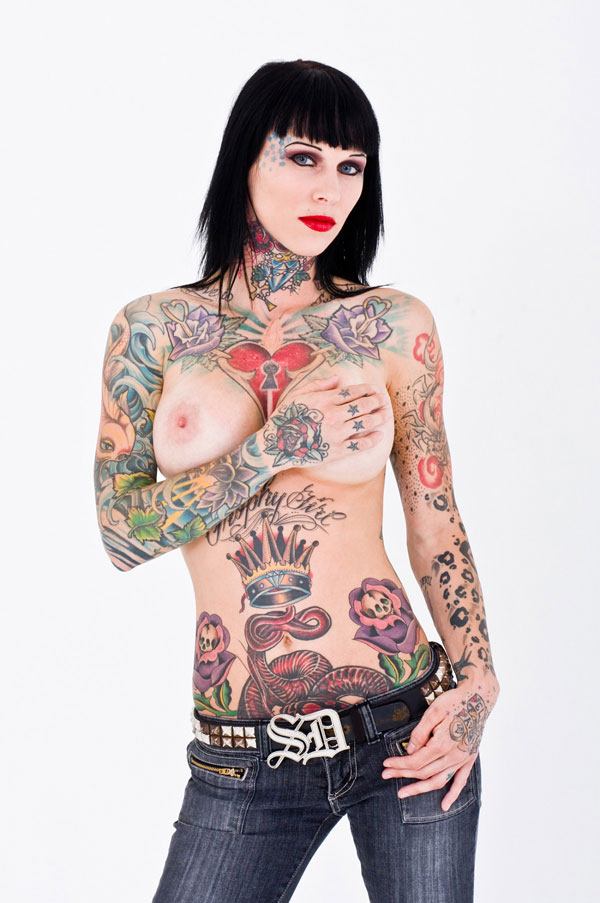 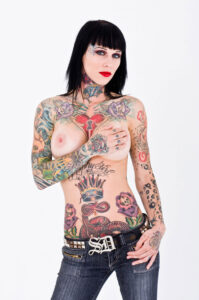 Well, the biggest news in Hollywood is that yet ANOTHER actress has been cheated on, shocking.  Everyone seems to love Sandra Bullock and sees her as America’s sweetheart.  We prefer to keep bringing up that Sandra Bullock did a wild nude sex scene, but she’d rather keep the sweetheart image to go with what WAS supposedly her perfect marriage.

Well so much for that idea as her husband Jesse James cheated with a stripper, not just any stripper, but a stripper named Michelle “Bombshell” Mcgee who is covered in tattoos.  Now if she didn’t bang Jesse James and screw up Sandra Bullock’s marriage she wouldn’t be any sort of “celeb” and would never make this site, but one affair and now she’s famous.

Now, of course, everyone’s digging up her nude pics, and analyzing her tattoos which she is literally covered in from head to toe.  Apparently, she’s got some nazi tattoos and is rumored to be a white supremacist; oh well whatever, all we know is she has naked pics and it’s our jobs to deliver them.

Sandra Bullock gets to look at these and think about how THIS tattooed stripper took her husband away, but the best revenge would be for Sandra to pose nude too and show Jesse how bad he fucked up.  What is the general opinion of Michelle Bombshell….hot or not?  Celeb? Worth cheating on Sandra Bullock for?  Comment below.