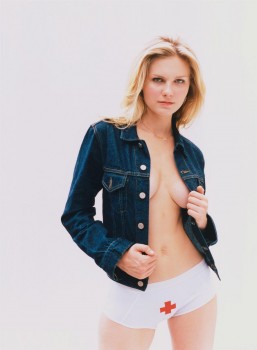 It’s been a great few days for celebrity nudity, first with the all the buzz over the Jessica Alba nude pics, and now a nude scene that gives many what they’ve wanted for years.

Ever since the first Spiderman movie, many people have been in hopes we would one day get to see Kirsten Dunst do a nude scene. Maybe her portrayal of Mary Jane Watson in the series had many fantasizing about being Peter Parker so they would have the chance to see the Dunst goods. Well now we can all rejoice that Kirsten has finally done a real nude scene. In years past she’s been in many movies that would “almost” show something or show a partial nipple for .5 seconds or something, but in this scene from “All Good Things” Dunst is totally topless and we get a great shot of her boobs.

It seems like lately all these actresses we’ve been hoping would hurry up and get naked are realizing that if they don’t, interest will start fading. We’ve been saying this for years now, so it’s great to see it happening whether it be via leaked pics or nude scenes. The more they give us the more we will feature on the site. Enjoy the first real Kirsten Dunst nude in “All Good Things.”