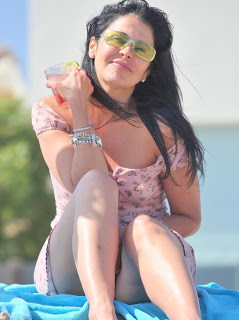 We’re sure you’ve seen Maria Conchita pop up in various movies and TV shows, but surely not like this. Looks like Maria apparently decided to hang out and really feel the breeze recently as she was caught hanging out, with no underwear in site!

Looks like she may have eventually caught on that her panty-less goods were being captured and finally covered up, but too late, we’ve seen what we wanted to see. Usually this kind of thing is a daily routine for Britney Spears, but catching a Hollywood type in such pics is always a good thing. And we promise this site was not meant to be a strictly upskirt site, but the amount of famous upskirts occurring lately are higher than ever, so of course we have to report it – and so far, we’ve gotten no complaints, so everyone must be happy looking up all these stars skirts!

So here’s a peek up Maria Conchita Alonso’s skirt…. 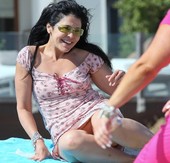 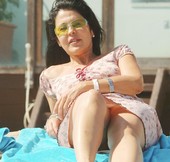 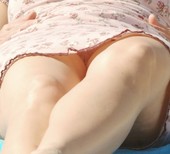