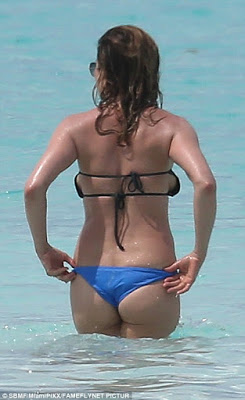 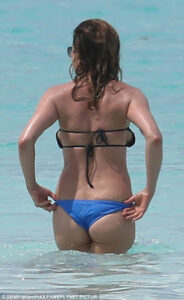 In the mid-90s, Jennifer Aniston was arguably the hottest celeb on the planet; it seemed like “Rachel” from “Friends” was everyone’s dream girl, and the idea of ever seeing her naked wasn’t even fathomable.  Over the years, Jennifer proved this thought to be true as it’s a rare case that we ever get to see any skin from her – maybe a hot photoshoot or a brief glimpse at her nipple in a sex scene, but never the full-on raunchy nudity we would expect someone to pay her for at some point in her career.

Nonetheless,  even all these years later, we’re still looking at Jennifer Aniston and even at 47 years old…..most of us still would – and apparently, her current Justin Theroux just did that because rumors recently surfaced that Jen was pregnant with a “miracle baby” given her age.  Just as soon as that news started to sink in, the pregnancy reports were denied and that seemed to be that….until these pics.

Anytime we hear about Jennifer Aniston in a bikini, we’re definitely looking; if it’s in a tiny bikini, all the better.  So basically Jen has her ass and boobs on display very well in these pics from the Bahamas, but her skin show has people wondering if maybe she really IS pregnant.

We think Jennifer looks great in a bikini especially for being 47 – maybe she isn’t in the shape she was in 1993, but then again who can expect that?  Maybe she is hiding a secret pregnancy, but then again she’s probably “been pregnant” 20 times over the years according to the rumor mill, so maybe she’s just relaxing and letting things go SLIGHTLY.

For anyone that says Jennifer Aniston isn’t still hot at 47, don’t even try saying you would turn her down.  If she is pregnant, then her body is obviously handling it quite well.  Pregnant or not?  We’ll let you be the judge – but our verdict is STILL HOT either way!