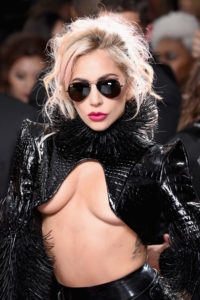 If we’ve learned one thing about Lady Gaga over the years, it’s that she loves getting naked.  From wardrobe malfunctions to stripping completely nude on stage on purpose and just about everything in between, we’ve been covering Gaga nudity for many years and it doesn’t seem to be slowing down any time soon. Her latest nude escapade is a bit different as it comes from her new Netflix documentary “Gaga: Five Foot Two.”

Gaga’s Netflix documentary actually has a pretty serious tone as it delves into the chronic pain she deals with, but it also shows that Gaga  doesn’t mind being  naked in her private life.  We see Gaga hanging out outdoors  with friends (women and men alike)  in a bikini, and then the bikini top is gone. Her friends don’t even blink at the sight of Gaga’s topless tits out, so that pretty much tells us that seeing Gaga topless is a regular perk of being in her inner circle.  Gaga carries on the conversation like nothing, and it sends a strong message – being topless in front of friends is normal, and more ladies  should take part.

This portion of the “Gaga: Five Foot Two” documentary kind of dispels the myth that Lady Gaga only gets naked for attention; it’s apparent that she really does enjoy being nude even in front of her friends in her yard.  While Gaga has struggled with many issues such as the chronic pain she talks about in this film, she has remained proud of showing off her body even during times when the media has been on her case for putting on weight.  Gaga showing off her boobs in this documentary shows that she really doesn’t care what anyone else thinks, and judging by the views below, we can’t argue at all: