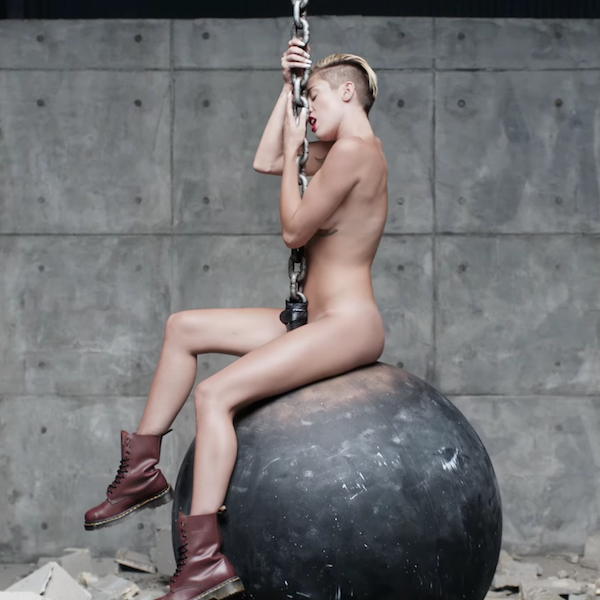 When Miley Cyrus made her transformation from innocent Disney star to raunchy sex icon, it left us wondering just how far she would go. There were nude photo shoots, topless beach trips, and even leaked pics that highlighted Miley’s enjoyment of peeing outside.

One of the most memorable things from that time was Miley swinging naked on a giant ball in her “Wrecking Ball” music video. The highly annoying part was that while Miley was nude, it was of course shot from the side so we didn’t get to see any of the good parts.

You have to imagine that the people who get to work on such a video get an eyeful of the goods at some point while the rest of us are left to fantasize. In the case of “Wrecking Ball,” a wrong has been righted and now we all get to see Miley Cyrus’ goods thanks to the REAL video leaking.

After seeing the leaked version of the video, it really seems like Miley meant to be seen nude since she’s leaning back and showing off her topless boobs and bare ass. We don’t know why this video WOULDN’T be released in this day and age of nudity being a big selling point of many videos (just ask Rihanna.)

There was also a big hype for an alternate version of the video that had us thinking it would be uncensored, but it just turned  out to be an up close shot of Miley crying (probably to represent our disappointment over not seeing her naked.) We never  thought that five years later we would be sitting here watching the nude version we always wished for.

We don’t know if Miley Cyrus is trying to go back to her good girl image, keeping the bad girl who always wants to be naked image, or somewhere in between. What we do know is that seeing Miley Cyrus naked on a wrecking ball is how the video should have always been seen. Check out the leaked version of “Wrecking Ball” featuring Miley Cyrus nude at the Phun Forum.

Also see: The Top 10 Musicians That Have Gone Nude On Screen