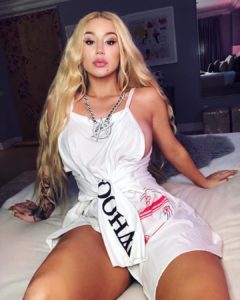 Nothing like starting the week with a celebrity leaked nude photo scandal. If you’ve seen the headlines today, you’ve probably seen Iggy Azalea’s name in them. Apparently, she’s pissed that topless photos of her have leaked online, but unlike most, they aren’t from a private collection, but outtakes from a topless photo shoot she did.

So what’s the problem? Iggy Azalea posed topless and now we’ve seen her boobs. Well, apparently she didn’t actually want anyone to see these pics. That’s right, just taking pics for fun at a photoshoot. The pics were taken during Iggy’s GQ Australia shoot, and the photographer is claiming they were stolen. There is actually a story on the GQ Australia site that features censored versions of the topless pics and reveals Iggy gave them to the doctor that did her boob job – yep, “thanks for these great tits doc!”

So Iggy Azalea admitted she got a boob job a few years ago, loves her big tits now, but doesn’t want them to be seen. Got it. Well however they got out, the world can currently see Ms. Azalea’s “enhancements” because the pics are all over the Internet.

Iggy seems pretty pissed and has deleted her social media over it for the time being – but it sure is generating a lot of publicity. While Iggy’s famous ass has been a real focal point in her career, her boobs can definitely be added to that list now. You can currently see Iggy Azalea’s big fake uncensored topless boobs on the forums that post leaked content.