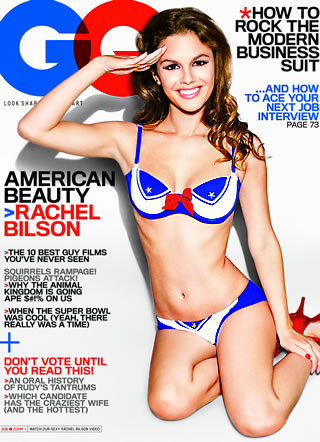 Wow, just after we heard the unfortunate news that former OC star Rachel Bilson told Playboy Magazine that she was against ever appearing nude in a movie, and she’d actually turn down roles if nudity was involved, we get her red hot spread from the February 2008 GQ magazine, which tells us she’s NOT afraid of stripping down to her bikini or underwear!

Suddenly we have a great feeling that while Rachel, at this young age, may feel like she’ll never get naked in a movie, this spread may be step 1 in her realizing that showing some skin is OK, and hopefully sooner than later, she’ll go ahead and strip down and get naked in a movie. But wow, these pics will definitely be enough to hold Rachel’s fans over….for someone who is against nudity, she sure can produce one hell of a provocative photo!

Here is the closest we’re going to get for now to Rachel Bilson nude: