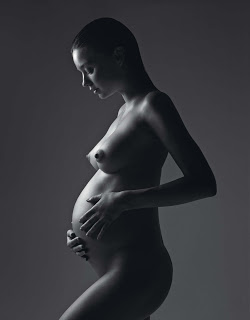 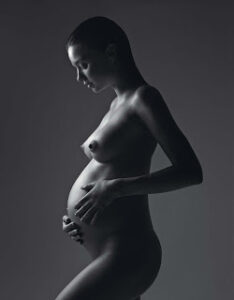 We’ve had our fair share of popular pregnant celebrity nude pics, and we are openly critical when a celeb chooses to do an “artsy” nude pregnant spread and covers her boobs/vagina/ass.  On the other hand, when a pregnant celebrity openly shows the pregnant goods, they receive our highest praise.

Miranda Kerr is known as one of the top Victoria’s Secret models and has been on many lists as one of the hottest models around for a few years now, but we haven’t featured her until now because we try to keep things celebrity-based since there are models getting naked all over the place on a regular basis. Well between being married to Orlando Bloom, constantly producing some of the hottest pics anywhere, and now letting us see her pregnant naked boobs, we welcome her to NSFW Celebs.

Miranda poses topless in the December 2010 issue of W magazine., and W gets yet another huge thumbs up from us after they recently gave us the Kim Kardashian nude spread.   Miranda isn’t shy about letting us see the belly and her bare boobs which have grown quite nicely and feature some pregnant puffy nipples to boot.  Now that Miranda is in our good graces, we hope to feature much more mainstream nudity from her both during and after her pregnancy.