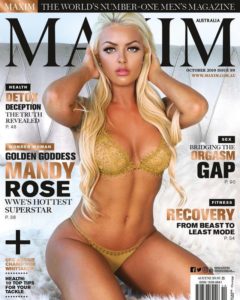 Since our site’s inception many years ago, the ladies of WWE have always been the topic of many of our most popular posts. In recent years as WWE has moved more toward a respectful and equal approach to women rather than having them strip each other’s clothes off in bra and panties matches, we’ve seen much less skin overall sadly. Today we get a throwback to the good old days when WWE women were allowed to be sexy – a “golden” ray of sunshine if you will as WWE star Mandy Rose stripped down for Maxim Australia and delivered one of the sexiest shoots from a WWE personality in many years!

“The Golden Goddess” herself as she is known on WWE programming was really meant for this sort of thing. Mandy Rose’s stunning look was undeniable even when she was trying out for WWE years ago on “Tough Enough.” Since that time Mandy worked her way up the ranks through WWE’s NXT and is now a viable in-ring competitor on the main roster…and of course, she’s still stunning!

Now if this was 1999-2003 or so Mandy would have A. been a top choice to be WWE’s yearly Playboy cover girl, and B. she would’ve had her boobs and ass out on TV every week as the queen of bra and panties matches.  But even though we are no longer in that era, Mandy has found a way to strip down to lingerie and show off her assets…maybe WWE doesn’t mind as long as it’s Australian?

Needless to say, even though these photos aren’t nude, just seeing a WWE star in lingerie with nearly her full ass on display in a thong and tits highlighted nicely as well, we really can’t complain. Mandy Rose’s look alone makes us long for the days when a little nudity with your pro wrestling was perfectly fine, and we think you’ll find it hard to argue once you see the photos from Mandy Rose’s super hot Maxim Australia shoot!