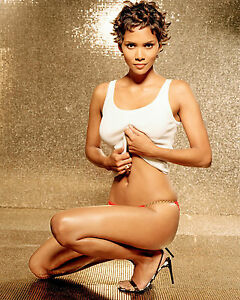 Today’s featured classic nude scene is no doubt considered one of the best of all time; Halle Berry finally decided to show her tits in the movie Swordfish and people made a huge deal of it since everyone was pleased that a big actress like Halle finally showed the boobs. Well, little did anyone know that Halle was just testing the nudity waters to see if she could handle it because she had a bigger and a lot more naked role coming up.

That role was in Monster’s Ball where Halle has a sex scene with Billy Bob Thornton that has been referred to as the most graphic and explicit in a mainstream American movie ever.

Anyway, the scene has Halle’s character drunk and telling Billy Bob’s character to “make her feel good,” which translates to “Please bang my brains out” which Billy Bob gladly does. We’re talking boobs out, then bent over and pounded from behind, then numerous other positions, even Halle on top riding Billy Bob which gives us a glimpse of Halle’s ass on Billy Bob’s dick, which shows his balls being grinded on, causing many people over the years to question if there was real penetration going over for the “good of the scene/movie.” Well, it’s hard to tell, but this scene left no one disappointed. 4 long minutes of naked Halle Berry sex, and it’s rough with lots of hard pounding, not to mention plenty of boob shots, ass shots, and a glance at Halle’s full-frontal area briefly a couple of times.