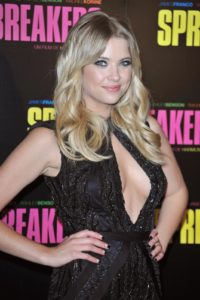 This is one of those posts that do not come along nearly as often as they should; it’s the moment when a hot celebrity that hasn’t got naked on screen decides to take her top off at the beach and take the risk that some super-skilled paparazzi isn’t around to catch the glorious moment.  That celebrity today is Ashley Benson who decided to let her boobs get some sun on a recent trip to the beach in Hawaii with her pal Shay Mitchell and fortunately for us ALL, one of those awesome members of the paparazzi captured all the magic.

Why is this particular celebrity topless moment a big deal to us other than the fact that Ashley Benson is hot and has great boobs?  The answer probably stems from the fact that she starred in the most hyped movie (as far as raunchy nudity teases) ever in “Spring Breakers” – a movie that did deliver some boobs and plenty of hot bikini moments but lacked any real nudity from the stars we wanted to see naked most (Benson, Vanessa Hudgens, and Selena Gomez.)

Fast forward to the here and now, and Ashley Benson who was too good to show her nipples in Spring Breakers whipped her top off at the beach and felt like her friend Shay Mitchell was the only one that would see.  Now we’re all for some bare boob tanning of course, but really it’s the fact that these pics confirm that Ashley totally lets her friends like Shay see her boobs openly without a care in the world – that might be the hottest thing about this!

So for anyone that felt defeated when Ashley Benson denied us all of seeing her topless boobs in Spring Breakers, here they are in all their topless glory and out in the open at a beach no less!  Now that we’re seeing them, she might as well get naked for real in a movie right?