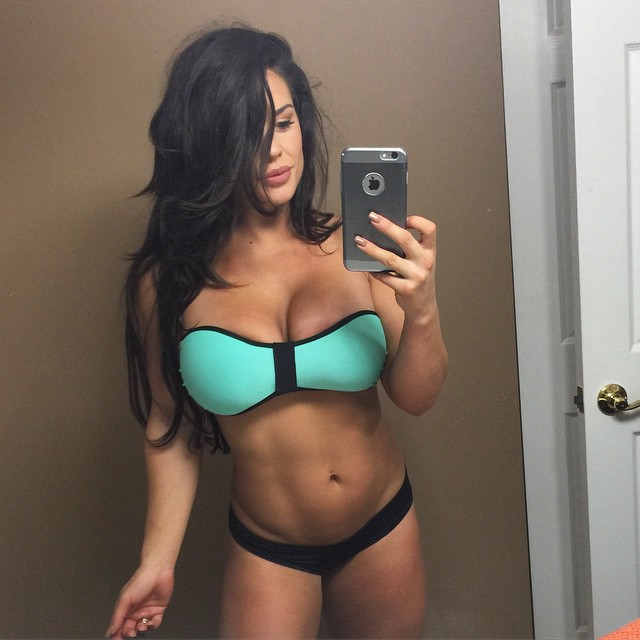 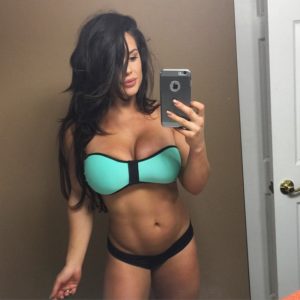 The absolute stream of leaked nude pics from the women of wrestling continues as former WWE Divas Champion Kaitlyn is the latest to fall victim to an online nude pic leak.

Kaitlyn (real name Celeste Bonin) retired from WWE in 2014 and went on to involve herself more in the fitness world. During her time in pro wrestling, she wasn’t regarded as the typical hot model type, which actually made her more appealing to some.  Kaitlyn’s most memorable feud was probably with AJ Lee, to who she lost the Divas title to which began AJ’s historic reign with the title.

When Kaitlyn moved on to the fitness world, it opened the door for her to post much more risqué pics (just to show off her fitness of course) and that really opened many eyes to how hot she really is; it’s almost as if we didn’t realize Kaitlyn had huge boobs during her time in WWE, maybe because she didn’t wear anything too revealing.  In many of her fitness photos, she would often pose topless with her arm covering her nipples….well these leaked pics do away with any need for that.

Unlike the Summer Rae leaked pics we posted on earlier that were fairly tame and had a few pics that were in question, the Kaitlyn leaked pics are definitely her and she’s definitely nude. These photos feature a bit of everything – full frontal nude selfies, numerous topless shots of Kaitlyn’s huge boobs, a provocative schoolgirl outfit, and some ass shots as well.  Kaitlyn was recently separated from her husband, but it’s hard to tell if these were taken for him at some point or maybe more recent now that she’s a free woman.

These Kaitlyn nude pics deliver especially if you are a fan of hers that was hoping pics would leak. If we were WWE, we would be bringing ladies like Kaitlyn (Celeste Bonin) back to the company because she’s obviously still driving fans crazy online. No response about the photos from Celeste yet, but she does seem to like fans admiring her body…there’s just a whole lot more for us to admire now.

The Kaitlyn nude pics are currently posted on the usual forums that are leak sources.