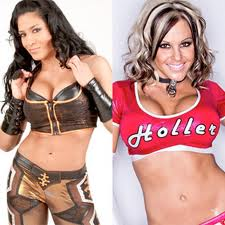 Just a few days ago we posted about the biggest celebrity leaked nude pic scandal of all time that is ongoing, now commonly referred to as “The Fappening” (if you don’t get that one, you should probably do some research.)

Big names like Jennifer Lawrence, Kate Upton, and Kirsten Dunst have been included in the scandal, but now things have grown to include alleged nude photos from two prominent names from the wrestling world: Velvet Sky and Melina.

These alleged nude pics are obviously stirring up a lot of interest in the wrestling world, mainly because they are two women who we haven’t seen a lot of nudity from if any.  Back in 2009, we did a post on some topless photos of Melina where she is only wearing body paint, but in these alleged nudes she is wearing nothing at all! Velvet on the other hand has been one of the hottest TNA Knockouts for the past few years now, but we’ve never seen her fully naked until this leak!

Melina has been away from the wrestling scene for the most part since leaving WWE a couple of years back but Velvet Sky has remained a mainstay in TNA, most recently reuniting with long-time partner Angelina Love as “The Beautiful People.” Sky was also recently revealed as dating wrestler Bully Ray in real life – a fact that has many of us giving him the proverbial “thumbs up” after seeing how great she looks in her nude selfie.

The nudes just keep on coming (mainly via Reddit) so there’s no telling who else’s nude photos have been hacked and will leak online.  These fully nude shots of Velvet Sky and Melina have wrestling fans clamoring from more WWE Divas or TNA Knockouts nude pics to surface, and we’ll definitely report them here if that’s the case.

As with our first post, we will link to the pics since there are still legalities involved, so head on over to our friends at Phun.org  who are currently featuring the Melina and Velvet nudes.