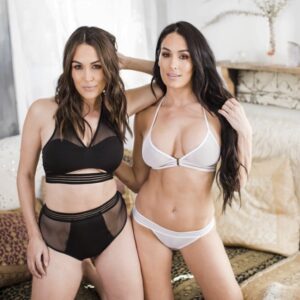 The Bella Twins, Nikki and Brie, are WWE Hall of Famers and stars of the reality TV shows Total Divas and Total Bellas.

Nicole and Brianna Garcia-Colace debuted on WWE TV in 2008, with Brie being seen first before the big reveal that she actually had a twin sister that was helping her in matches. “Twin magic” put the Bella Twins on the map as two sexy new stars in the “WWE Divas” era.

The Bellas actually left WWE in 2012 and created their own website where they posted sexy photos, long before OnlyFans was even a thought. When they returned to WWE in 2013, Nikki and Brie were suddenly easier to tell apart, probably because Nikki suddenly had much bigger boobs. Yes, Nikki has become well known for her pride in her fake tits, and we’ve never seen anything wrong with that!

Once the Bellas became reality TV stars, they even briefly feuded against each other on WWE TV, but sadly their feud missed the bra and panties era. While Nikki became a singles star, Brie became a mom in 2017 and suddenly had a natural pair of bigger tits.

Ah, the joys of the social media era. With everything being documented in photos and videos these days, it’s actually surprising we don’t have more posts like this. While many celebrities are seemingly posting online all day
Read More
**This post is courtesy of our friends at Celebrity Sin, be sure to follow them on Twitter @Celebrity__Sin** Since I could walk, I’ve been saying my prayers and eating my vitamins. Sitting in front of the TV
Read More
It’s almost hard to believe in this day and age of WWE being family friendly and barely allowing their talent to push the envelope in any way, that we would still find yet another current talent has
Read More
WWE grabbed our attention this week in a way they haven’t in many years; if you’re a long-time WWE fan you undoubtedly remember the days when “HLA” (that’s Hot….Lesbian…Action) was something that was encouraged and something that
Read More