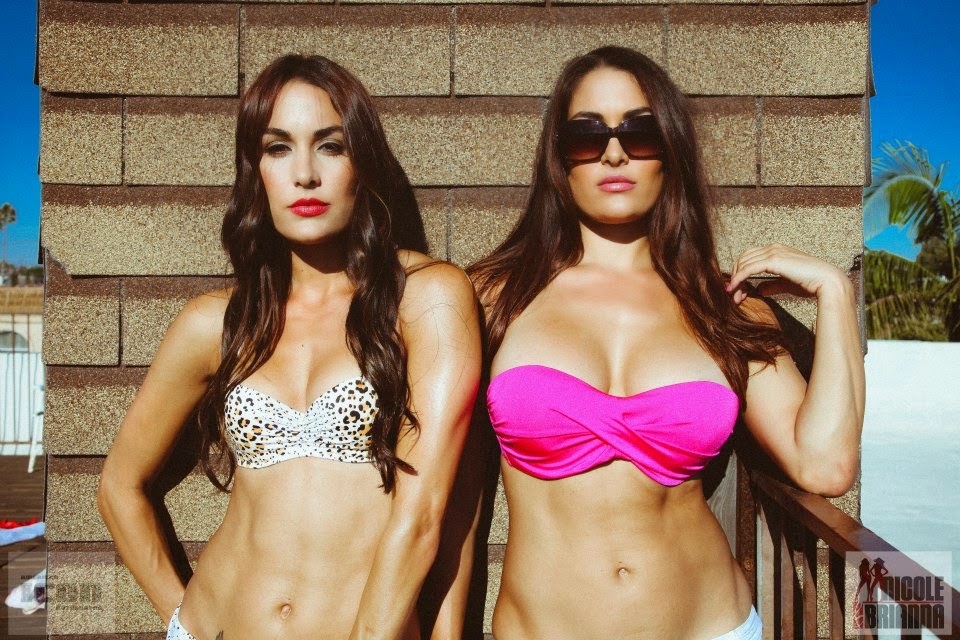 WWE grabbed our attention this week in a way they haven’t in many years; if you’re a long-time WWE fan you undoubtedly remember the days when “HLA” (that’s Hot….Lesbian…Action) was something that was encouraged and something that went right along with WWE’s more adult product at the time.

Of course the past few years things have gotten pretty boring with the Divas since WWE’s TV-PG era barely allows for any skin or anything sexual, so it was quite the shock to see Brie Bella hop on the ring apron and kiss AJ Lee right on the lips at WWE’s Survivor Series…maybe even more so since the Bella Twins have been stars of E’s Total Divas.

Now maybe a girl on girl kiss isn’t THAT big of a deal these days, but it’s something we definitely welcome back to WWE programming; now that we think about it WWE has slowly been re-introducing girl on girl flirting and “crush” type stories, usually involving WWE’s newest Diva sensation, Paige.

The Survivor Series kiss made us think back to some of the Bella Twins’ sexiest moments, and in the process, we ran across a rare Bella Twins photo shoot that seems to come directly from some sort of awesomely perverted fantasy.  I mean what Bella Twin fan hasn’t imagined how they probably hang out naked together behind closed doors?

This shoot happened during the brief period that the Bellas left WWE in 2012 and launched their own website; apparently, they had much more of a grasp on what many of their fans want than WWE did as the pics that were featured were sexier than just about anything they’ve been allowed to do in WWE.  The “Bella Twins” may have temporarily been gone from WWE, but the website Brianna and Nicole Garcia put together makes us sad it’s no longer in existence!

Of course, the Bellas have hundreds of sexy pics out there from over the years, plenty in skimpy bikinis, and plenty with Nikki Bella showing off her big fake boobs, but this shoot just seemed much more sensual.  We get to see the Bella’s in bikinis and rubbing suntan lotion on each other (which is quite nice to see a pair of hot twins do in itself,) then we see them just hanging out in their underwear together like it’s no big deal.  From there we get to see Nikki baking cupcakes, and Brie apparently wanting a taste of Nikki’s cupcakes……::sigh::

Between Nikki licking up icing and Brie letting her ass be photographed, this has to be the Bella’s hottest shoot ever.  There are even a couple of pics that make you wonder if the Bellas are checking each other out…..we wouldn’t blame them, look at them….but that’s a whole other fantasy.

So enjoy these HOT Bella Twin pics, and let’s hope Brie’s little bi-sexual moment at Survivor Series will be the beginning of the Divas getting to be sexual again, which obviously makes fans care about their division and stories MUCH more….remember the days of Trish Stratus anyone?