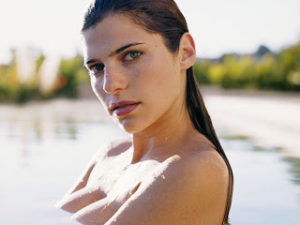 Lake Bell is one of the hot actresses we’ve seen around for a few years now in movies and TV but has always been on the “why doesn’t she get naked” list.  We are even a little late delivering this news because it took a while to look into it after reading all the massive buzz her scene produced.  She actually did the entire first season of “How to Make It in America” without getting naked, but for season 2 she has gained the show a ton of attention by doing a topless scene.  The buzz was huge since not only did she finally decide to do a nude scene, but it also verified suspicions after years of seeing her in skimpy tops that Lake has some pretty perfect boobs.

The highlight of it all might be that Lake even commented on the nude scene on her Twitter as she posted:

“My boobs are appreciative of all your kind/lascivious words. After all, it’s solid support that’ll keep them perky. #HowToMakeIt #sorrydad”

So she definitely has heard fans loud and clear, her boobs will gain her more attention, so she should keep on showing them and even more.  She is the shining example of…”How to Make It in America”….indeed.  Check out the awesome Lake Bell topless scene below: