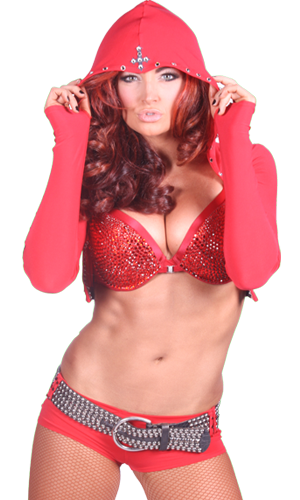 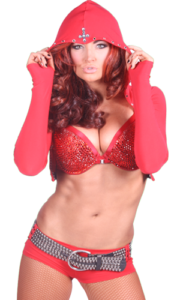 It’s almost staggering to think about the amount of hot women that WWE has let slip through their fingers in recent years; from the never ending legs of Stacy Keibler to the mega hot Torrie Wilson who took it all off for Playboy just to name a couple, there is a long list of hot ladies we wouldn’t have minded seeing a LOT more of.  The red hot Maria Kanellis fits perfectly into that category.

Like a select few other former WWE Divas, Maria Kanellis was chosen to take it all off and posed nude for Playboy back in 2008; while Playboy is cool and all and we certainly appreciate the nudity, we all know the airbrush type feel that Playboy pics deliver and it’s just not the same as seeing some real-life untouched nakedness…..especially when it’s in motion!

Since Maria left WWE in 2010, she has mainly been involved with Ring of Honor wrestling with her now-husband Mike Bennett…that’s right, we said husband, and we can gladly report that even in 2014 as a married woman, Maria Kanellis has a topless scene in the movie “Opposite Sex.”

In the scene, Maria comes downstairs completely topless as she confronts her man for not coming upstairs and giving her the goods instead of playing video games.  Maria goes as far as standing in front of the TV and showing how great her tits look, asking her man if she wanted “these” or if he wants to keep playing video games – the guy then actually wants Maria to COVER HER BOOBS and pretty much blows her off like she’s bothering him…..yeah, he’s either gay or……gay.

This really is great to see, a former WWE Diva getting topless in movies and giving us what we really want. No more WWE restriction, no becoming holier than thou, and acting like getting naked is horrible and turning all churchly on us.  Maria Kanellis is HOT, and apparently, ROH is the only bigger wrestling promotion smart enough to be using her right now; works for us, because seeing her in nude scenes in movies works just fine for us…..and DAMN do her boobs still look great!