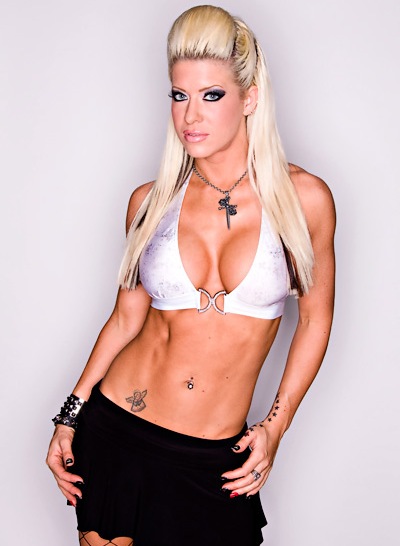 Wrestling fan fantasies have once again come true thanks to a nude content leak.

Angelina Love has been a member of one of the sexiest duos in wrestling over the past few years, “The Beautiful People” along with Velvet Sky (who also had a minor nude leak a few years back.) While Angelina was part of one of the most provocative acts in wrestling, it seemed like actually seeing her get naked was never going to happen…until now.

Angelina Love (real name Lauren Williams) has been an on again off again star with Impact Wrestling (formerly TNA) for many years, and it seemed like we wouldn’t see much more from her after it was announced that she was pregnant by fellow wrestler Davey Richards a couple of years ago. Love has since returned to wrestling and has also split with Richards.  While it appears that this leaked content was before her pregnancy, it’s hard to tell who she was hooking up with at the time of the leak since online rumors infer that she has “enjoyed” several members of the locker room.

The leaked photos feature a nice variety of Anglelina topless, in panties, and even up-close pussy shots.  But the real eye opener in Ms. Love’s set is the video that features and up lose view of her riding dick – let’s just say she’s showing skills we only fantasized about during her famous wrestling entrance.

Years ago TNA reportedly struck a deal with Playboy and Angelina Love was one of the most requested “Knockouts” when it came to who would pose nude. Sadly that deal didn’t run very long, but now the good old nude leak strikes again and we get to see more of Angelina than we ever imaged. You can see all the Angelina Love nude content as it continues to surface on the Phun Forum.