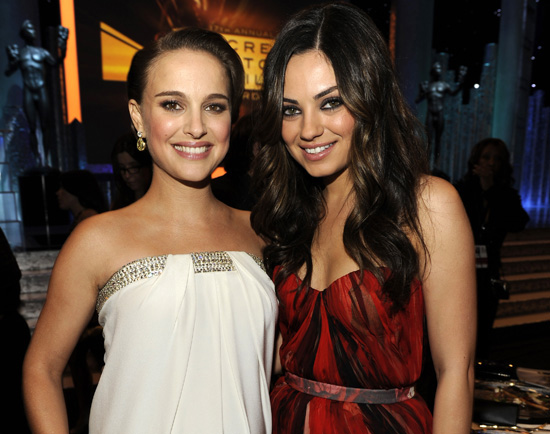 It’s been quite some time since we have had a new addition to our Classic Nude Scene series, so we’re bringing it back with one of the hottest lesbian scenes ever filmed. When “Black Swan” was released there was a buzz about it being a great film, but of course our interest lied with the possibility of Natalie Portman and/or Mila Kunis getting naked.

After a night out partying, Mila and Natalie get back home and of course Natalie’s mother is trying to interfere again. At that point Natalie slams the door in her face and proceeds to attack Mila sexually. This scene plays out like something we could have written ourselves! So after the great buildup, Natalie finally lets Mila have her way with her as (some) clothing comes off and pretty soon Mila’s face is in between Natalie’s legs. The scene is shot at an angle where you see Portman’s panties coming off so you don’t see EVERYthing, but they still made it hot enough to greatly impress us.

Of course this psychedelic movie has Portman freaking out and she briefly sees herself going down on her, but we are OK with that too. At this point see Natalie Portman’s orgasm faces as Mila finishes her off (complete with kissing her in between for added mental sex for us all.) Could the scene have been better? Sure. If both ladies had been at least topless and of course we can all fantasize about it being a full on XXX extravaganza, but for what it was this scene was unbelievable hot and they really made you feel like they couldn’t hold themselves back any longer.