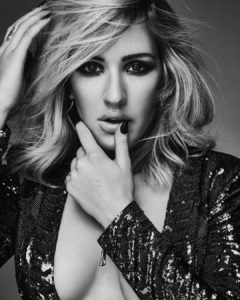 If you’ve seen headlines recently with Ellie Goulding’s name in them, they were likely about her upcoming Thanksgiving performance at the Cowboys/Bills game. There was some controversy involved, but only surrounding the fact that Goulding threatened to pull out of the performance due to the sponsors and her beliefs and….anyway now there is some Ellie Goulding controversy that’s up our alley; namely a nude photo leak.

Ellie Goulding is not a star that we really expected anything like this from; sure she’s hot, sure we wanted to see her naked, but she just didn’t give us the vibe that she was taking sexy nude pics in her private time – we were wrong. This set of photos has been teased for a while, with censored versions previewing what was to come, but today we got the payoff with some surprisingly seductive Ellie Goulding nudity.

While the leak is still ongoing and some of the photos are still only available in censored form, there are a few shots of Ellie’s topless boobs and other still-censored pics that appear to show her bent over for the full rear view. Probably the most surprising pic so far is Ellie posing topless and holding her boobs while only wearing panties, with none other than Rita Ora who is doing the same! The thought of a wild Ellie Goulding and Rita Ora nude photo session is a celebrity leak dream, but so far only one pic of the two is out there.

We’re giving thanks early as these photos will enhance our Ellie Goulding performance viewing on Thanksgiving day. This goes to show that no matter how much you’ll ever get to see a given star nude, leaks make anything possible.

The leak is ongoing and more uncensored photos should become available in due time, for now, keep up with the Ellie Goulding nude leak on the forums that post leaks.