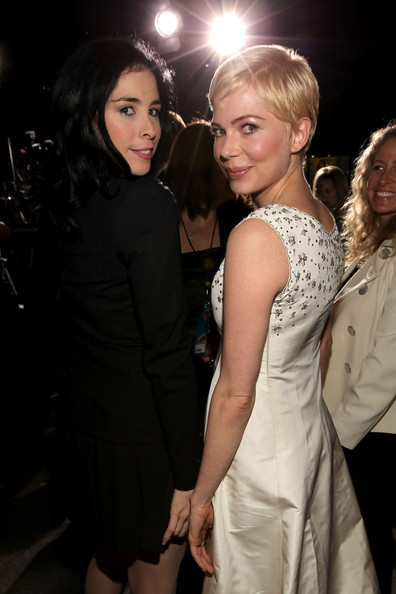 The movie “Take This Waltz” has been on our radar for quite a long while now, ever since rumors spread that Sarah Silverman would go fully nude in the movie.  It was an odd bit of news because Silverman isn’t the first celebrity you would think of when it comes to doing nude scenes.  Silverman is a more of a smart ass comedian and over 40 years old, so the hope of every seeing her naked were seeming grim.  I think the big interest in this rumor were based on the fact that Silverman getting naked was so different and unexpected.  Well now we can confirm that not only does Sarah Silverman go fully nude with a great full frontal view in “Take This Waltz,” she does so with nudity veteran Michelle Williams, and they’re in the shower!

While the scene is indeed a nude shower scene with multiple girls, sadly it isn’t a lesbian orgy, but quite the opposite.  We get the great nude shots of Silverman and Williams along with Jennifer Podemski, but then things take a turn when a bunch of older, larger, also naked women join the scene.  In the big picture it’s a small price to pay since we finally get to see Sarah Silverman nude and it’s never bad to see more of Michelle Williams naked too.  I’m sure many will be hard at work to edit this scene up and take out the other women.

As far as the nudity goes, Williams shows it all as we get her boobs, bush, and ass in the scene. Silverman shows her tits and bush, but the angle doesn’t give us an ass shot. Jennifer Podemski gives us the full monty as well as she turns around and bends over for an ass shot at the end of the scene.  In a perfect world we would have preferred to see the ladies pussies shaved down instead of the bush (do any females really keep a bush like that anymore?) but this scene is still great.  Below is the full scene featuring Sarah Silverman’s first nudity on screen: