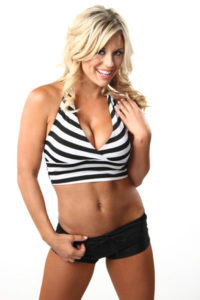 If you watch TNA Impact Wrestling on Thursday nights on Spike TV like us, you are treated to a great selection of TNA Knockouts that range from those that actually wrestle, to mega-hot ring announcer Christy Hemme, right down to their very own Knockout referee – Taryn Terrell. That’s right a female wrestling referee, which means very short shorts and a lot of bending over to count type situations. If you are a big wrestling fan you will notice right away that Taryn was once known as ECW General Manager “Tiffany” in WWE.

Like many other wrestling women, Taryn Terrell has done some adult work in her past that involved getting very naked. She did some work for Playboy and went all kinds of nude, but we’ve also uncovered this scene from the HBO series “Treme” in which Taryn gets naked and shows both her big boobs and her ass. The scene looks like something many fantasized was going on backstage when Taryn was General Manager in ECW as she walks in and asks for the guy’s opinion on her tits.