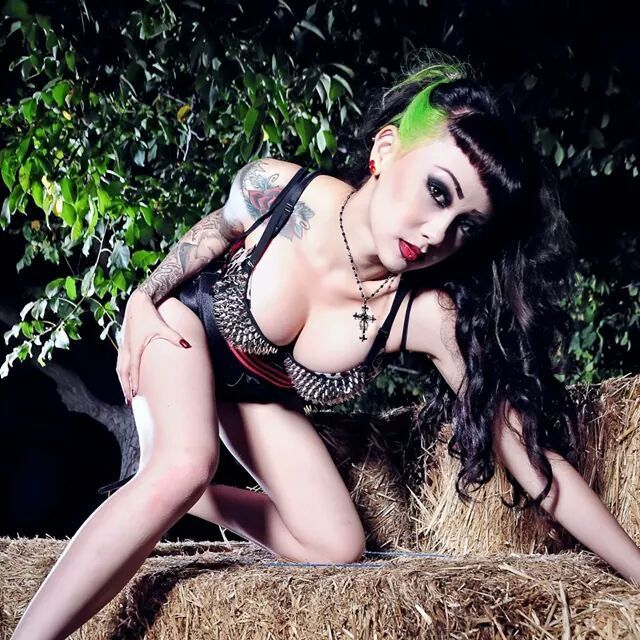 The holiday season is in full swing and the gifts are already arriving, and by gifts, we’re talking about yet another star from the pro wrestling world that is all about giving us nudity. Shotzi Blackheart has been catching a lot of eyes on WWE’s NXT, and she’ll be catching a lot more after what we’re bringing you today.

If you’re a fan of WWE’s NXT brand, you’ve undoubtedly seen Shotzi Blackheart get a lot of spotlight in the past few months. Her unique look and character provided the perfect host for NXT’s Halloween Havoc in October, and Shotzi’s unique visual appeal has definitely translated into sex appeal as well.

If you’re familiar with her story, you know that Shotzi Blackheart (real name Ashley Urbanski) was actually selected to be on WWE Tough Enough years ago but had to leave the show due to a medical condition. It wasn’t until last year that Shotzi was officially signed and became part of NXT. So what did she do in between? Well, all kinds of things a site like ours can appreciate.

So if you are fans of Shotzi’s sex appeal you likely know that there have been topless photos of her floating around for quite a while. They’ve definitely been on our radar but we wanted to know more about her posing naked. For instance, we learned in these topless pics that Shotzi has… heart-shaped tattoos….on her nipples. That’s right, areola hearts – talk about tits that were meant to be seen…

Now we enjoy our Christmas movies with nudity, but this is some next-level stuff as we see Shotzi fully nude and trapped in some sort of torture device when an evil Santa guy comes in and murders her. Things get even weirder from there but you can watch the full scene featuring naked Shotzi and get the full experience for yourself:

But wait that’s not all! Upon further investigation, we found that this wasn’t the only time Shotzi Blackheart has been nude in a movie! Shotzi also removed her bra and went topless in the movie “Doll Murder Spree” and also showed her ass and complete full-frontal nudity for a bath scene in the film “Forgotten Tales.” Maybe the best part is that both of these movies are available free on Tubi:

So maybe the bigger surprise here is that WWE even signed Shotzi after she’s done so much nudity work and since they barely like to let any of the ladies be sexy anymore. Shotzi is obviously a free spirit who doesn’t mind doing whatever it takes to make ends meet (at one point she was even selling pics of…what she did in her toilet… to fans who desired such things years back.)

All we can hope is that Shotzi Blackheart has set a standard for the ladies who don’t mind getting naked but still have WWE aspirations that will allow them to achieve their dreams.