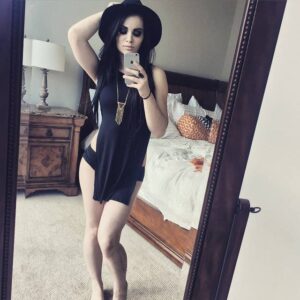 It’s been a long time since we’ve had a good leaked pic scandal, but it seemed like the infamous “Fappening” was going to be the biggest and best ever…..at least for a while.  Of course, that doesn’t mean there aren’t hopes and dreams of another scandalous leak happening, and the WWE Divas are often at the center of such hopes for many.

While some may expect nude pics from WWE women that push sexiness like The Bella Twins or even Lana, Paige is kind of the outcast whose dark goth look made us think we’d never see such things from her…..until today.

We’re not saying Paige isn’t hot, it’s just that her image isn’t that of a typical “WWE Diva” per se – then again Paige has broken barriers as far as becoming a member of the Total Divas cast and has carved her own niche as far as defining what a sexy WWE Superstar is all about.  Maybe it’s the fact that you don’t look at her and expect her to have her boobs out in a bikini or underwear that makes her even more appealing, or maybe it’s the fact that she can actually wrestle and isn’t just there for eye candy.

Of course, if you’ve seen Paige on Total Divas then she isn’t exactly a saint either; while she does seem fun she also isn’t opposed to a wild drunken night or having a new boyfriend each season – oh, and just last week she was involved in some controversy with her current boyfriend…….WWE Superstar Alberto Del Rio, yeah, THAT guy.

But none of that tops today’s alleged leak of nude pics that feature Paige posing in a selfie (which she does regularly on Instagram) but this time….she’s exposing her breast.  The pic looks like it was probably taken sometime in the past couple of years, and there is much debate about it being real since Paige’s mom is actually on Twitter claiming it’s photoshopped….but this pic does appear like it could be the real deal.

Furthermore, more pics have leaked that allege to show Paige having…….relations, with former RAW GM Brad Maddox.  We’ve never heard of those two being a couple, but you know what they say about what happens on the road….

For now, we’re monitoring the situation via leak forums who have both the boob exposed Paige pic along with the alleged sex pic.  There’s a lot of debate going on, and investigation as far as matching up the phone in the pic with the phone she’s normally seen with…..and they match.  We’re going to stay on this story and hope this is only the beginning and more leaked Paige pics are on the way!