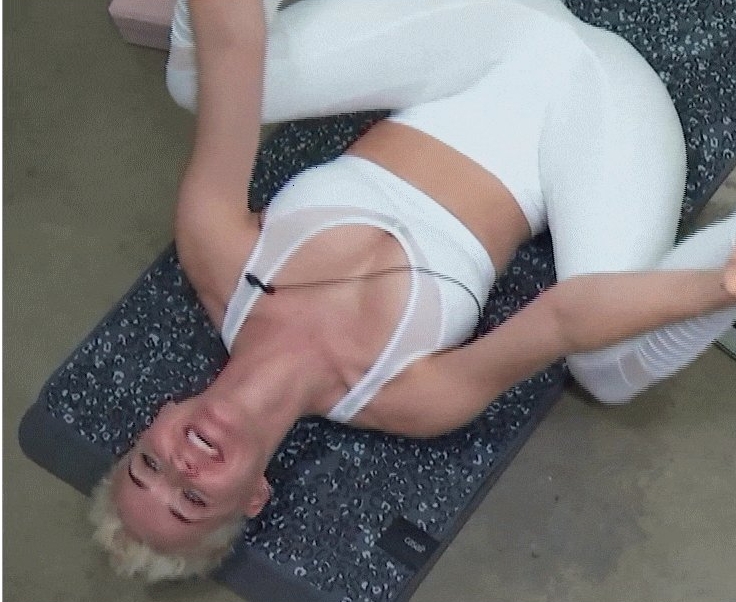 So over the weekend Katy Perry decided to live stream her life 24hours a day on YouTube to promote her new album – “Witness World Wide” – think Big Brother with Katy Perry as the main houseguest.  So of course Big Brother means live cams, watching people do and say everything uncensored etc.

So of course our first thought was “will there be a shower cam?!” Sadly, the answer was no so watching Katy Perry eat, have celebrity guests over, and even sleep were pretty much all we got….except when things are live, the chance to catch a slip here or there is always possible.

You would think Katy Perry might realize that letting the world watch her shower or even change tops might triple her record sales immediately, but I guess some promotional tactics would be just TOO obvious.  Thankfully, Katy at least got semi-naked a couple of times over the weekend and we got brief glimpses at her bare ass and some sideboob that proves she still has the most sought-after pair of huge boobs that we all want to see.

Katy has cut all her hair off and trimmed down quite a bit since we saw her bathing suit fall off at a water park, so the intrigue of seeing her naked was there all weekend; unfortunately she must not have researched the fact that many of us watch Big Brother style live feeds pretty much just to hopefully see boobs.

The couple of naked moments came when Katy brought some special masseuse into her house for a naked massage – problem being Katy was only naked under a robe.  Luckily, Katy obviously isn’t used to having cameras at every angle so we got a glimpse of her ass as she was getting up from the massage table without fully covering up. Just after that we got a sideboob shot – and yes, they’re still huge.

So while at least a semi-visible Katy Perry shower cam and completely uncensored viewing would have broken the Internet, maybe this will open up the idea for more artists to stream like (can you imagine a Rihanna stream with weed parties and strippers all weekend? Ok maybe that would have to air on a different platform.)

Here are the brief glimpses of Katy Perry’s goods – first her naked ass:

You can check out Katy Perry’s live stream for a few more hours at youtube.com/katyperry
Tags:Katy Perry