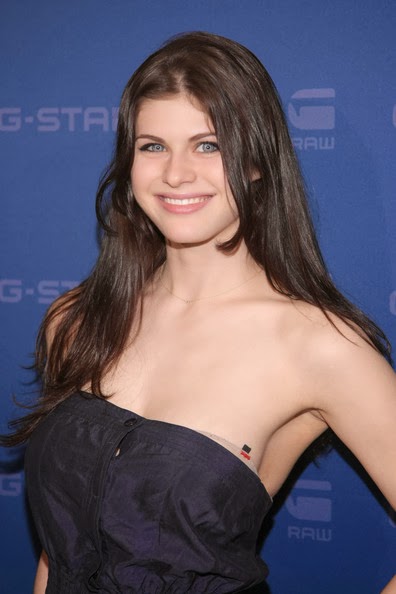 We must admit that there may not have ever been a bigger buzz for nudity from an actress we weren’t overly familiar with than that of Alexandra Daddario’s nude debut in HBO’s “True Detective.”  From what we gathered…”the hot girl from the Percy Jackson” movies was the common response as to who Alexandra was, but after some research and viewing her first nude scene over and over again….we can gladly say we definitely know who Alexandra Daddario is now!

The reason for the buzz may be because frankly many people wouldn’t expect an actress from a movie like Percy Jackson to do such gratuitous nudity….fantasize and wish, yes….expect? Not so much.  Or maybe the reason is because Alexandra has huge real boobs and actually getting the chance to see them naked isn’t something that happens often.  She even challenges Rosario Dawson in the real giant natural boob category…yes they’re that amazing!

The scene itself features Daddario with none other than Woody Harrelson, who at his age must be really feeling quite lucky to be staring at Alexandra’s COMPLETELY nude body.  As a matter of fact, it was probably the fact that Harrelson is a veteran of seeing naked females in movies that made things easier as they no doubt needed someone that could…”keep it down” during her scene so to speak.

To kick things off Alexandra takes off her shirt and has absolutely nothing under, which gives us a look at what have to be considered award winning boobs.  We’ve seen nice boobs, big boobs, fairly large boobs, but these are the biggest, nicest natural set of boobs we’ve seen in years.  As things heat up, her panties come down next as she bends over so we get the full view of her ass too.  And as if that’s not enough, she gives us one more scene without panties and gives us a quick full frontal shot…and lets just say there is a great view of BOTH of Alexandra Daddario’s sets of lips.  Woody (yeah we know) decides to have a taste of her from behind at that point, which sadly ends the scene…but really there is ZERO room for complaint about this scene.

Alexandra Daddario looks like the type of actress that is so hot (in the sweet type of way) that she would never get naked for a role. Luckily, she has blown away that notion by delivering a nudity debut that already qualifies as an all-time great.  No word yet on if her role will continue on “True Detective,” but if she remains open to allowing her breasts to land her roles, she has quite a future!  These boobs may actually top many lists as the best ever shown and may stay there for a while until more huge natural contenders are shown (we’re looking at you Katy Perry.)

So here it is, Alexandra Daddario’s nudity debut in “True Detective”…and be warned, you may need ample time to fully take this scene in: