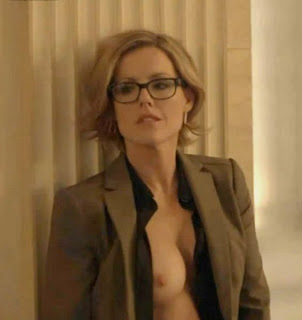 Hot on the heels of our report on the awesome Lake Bell topless scene in “How to Make It in America,” we have even more premium channel nudity to deliver.  This time it’s Starz giving us Kathleen Robertson finally getting naked in their new show “Boss.”  The show stars Kelsey Grammer, and Kathleen Robertson cast as his personal aide who seems to enjoy finding a stairwell or a secluded corner to fuck some guy any chance she gets…..sounds good to us.

Kathleen is probably most famously known as “Clare Arnold” from the glory days of 90210.  Back then she was a seductive character that seemed horny all the time and always down to seduce a guy, but how far could she go on network TV?  Since then, she’s done movies like XX/XY and Scary Movie 2, but only teases of nudity.  At age 38, it seemed like we were never going to see her get naked and stop teasing us.  That fear was put to rest on the very first episode of “Boss,” as Kathleen got it on with some guy and showed her boobs for the first time on screen.  Even better, in the second episode, she gets another hot fuck and shows her tits once again.  If she keeps up this pace, every episode will definitely be “can’t miss TV.”

Below we have BOTH Kathleen Robertson nude scenes from “Boss,” which will go down as the first time she has shown the goods on screen.  Hopefully, each episode leads to an even hotter nude scene since that seems to be what her character “Kitty O’Neil” is all about.