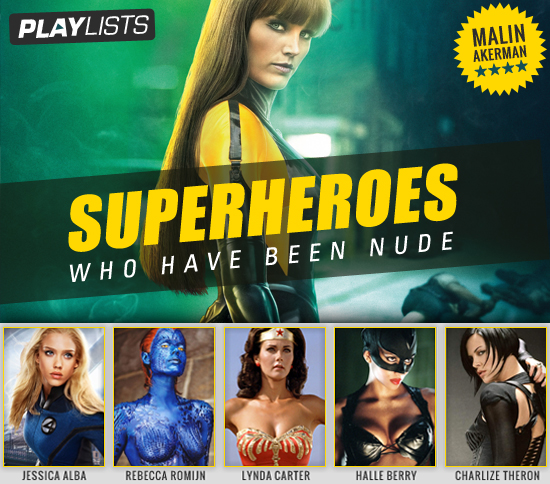 Superhero movies regularly deliver the type of female characters that are not only hot, but also make you feel like they could kick your ass.  Something about a hot actress in tight spandex dominating her foes is a real turn on for many, so imagine seeing the same actress strip down for a nude scene! That’s what we’re featuring today as we look at the hottest superhero movie actresses that have gone nude!

For this list we’re going back to classic superhero actresses like the original “Wonder Woman” Lynda Carter all the way to more recent stars like the red hot current “Wonder Woman” Gal Gadot” and “X-Men” series regular Jennifer Lawrence. When you stop and think about it, so many big time actresses have played superheroes at one time or another – big names like Scarlett Johansson, Jessica Alba, Rosario Dawson, and yes even Halle Berry (although many may want to forget her version of “Catwoman.”

Check out our list below and see if your favorite superhero actress on the list, then enjoy them stripping out of their costumes and baring it all in their hottest nude scenes from movies and TV:

10. Malin Akerman in “Harold and Kumar Go To White Castle

6. Jessica Alba in “The Killer Inside Me”

4. Lynda Carter in “Bobbie Jo and The Outlaw”

1. Scarlett Johansson in “Under the Skin”

So there you have it, the 10 hottest nude scenes from lady superheroes; Did we leave your favorite off our list? Be sure to check out the full Superheroes Who Have Been Nude Playlist!