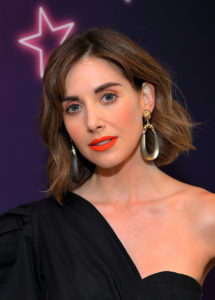 GLOW has undoubtedly become a major hit for Netflix; with season three just dropping and each season continuing to get great reviews, we hope the show has many more seasons in its future. But back when GLOW was an unknown show that had no certainty of success, Alison Brie stepped up and went topless in the very first episode and suddenly we were all paying attention.

So suddenly GLOW used boobs to bring us in, then throughout seasons 1 and 2 we got good stories and characters (and more boobs, of course, just not from Alison after episode one sadly.) But season 3 is celebrating GLOW’s success with another topless scene from Alison Brie that we feel is just as good but probably even better than her early scenes.

During her first nude scenes in GLOW, we saw Alison Brie in a sex scene riding the guy hard as her tits bounced everywhere; then we saw her undressing in a locker room for another brief boob shot. Both of those scenes were fairly darkly lit but still great.

In season three we get a much brighter scene where Alison’s character “Ruth” tries on a showgirl headpiece but is told by costar Betty Gilpin (who plays Debbie, and who also gets naked this season, but that’s another post for another time) that it doesn’t look right with her regular attire. Alison proceeds to take her top right off and shake her naked tits almost right in Betty’s face. The scene is brightly lit, it shows Alison’s boobs in all kinds of motion, and the scene is everything we would want in a basic topless scene. Check out some caps below:

Be sure to check out season 3 of GLOW on Netflix, and watch episode 3 to see Alison Brie’s bare boobs in motion!