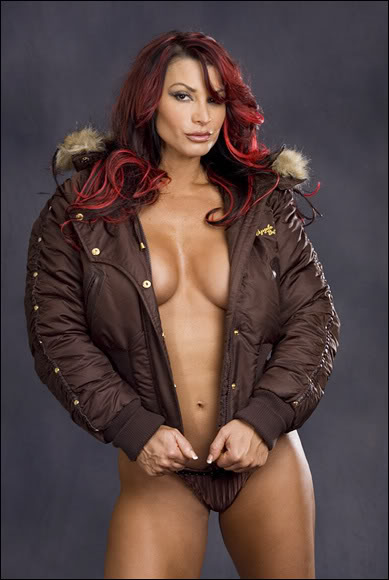 *5/4/17 update – Dozens more nude and explicit sex photos and video of Lisa Marie Varon have leaked, they can be seen at the link at the bottom of this post.*

Just a couple of weeks ago, the biggest nude leak scandal ever to hit wrestling took place and it’s still being talked about; kicked off by the explicit Paige sex videos and pics and followed by nude leaks from other wrestling stars like Summer Rae, Melina, Maria Kanellis, and Kaitlyn, this is undoubtedly the biggest leak to hit the women of wrestling at one time.  One other star had pics leak, but we waited until now to report on it since more were rumored to be coming but never surfaced, so today we had Lisa Marie Varon aka Victoria nudes to the list.

Known as “Victoria” in WWE and “Tara” in TNA Wrestling, Lisa Marie Varon is a bit of a surprise addition to the list of leaked wrestling nudes since she is more from WWE’s Attitude Era as where the other leaks were from a bit more recent era.  Varon is a former WWE Women’s Champion who first won the title during her memorable feud with Trish Stratus.  As “Victoria,” Varon made quite an impact in WWE during one of it’s best eras for women’s wrestling.

After WWE, Varon became “Tara” in TNA and had another memorable run there, hodling their Knockouts Championship numerous times.  While Varon always came across as a viable in-ring competitor, she still carried a bit of sex appeal – whether it be doing sexy photoshoots during a time when WWE really pushed that sort of thing, or engaging in girl on girl kissing with Brooke Tessmacher in TNA which made for one of the most memorable entrances ever, Lisa Marie always seemed down for a good time.

A few years back, things got a bit messy it seems as Varon was involved in some online controversy after calling her husband out for cheating with a worker at their “Squared Circle” restaurant in Chicago; she posted pics and phone numbers, put the story out there for the world to see, and seemingly moved on from her marriage.  At this point, it’s not clear if her marriage worked out or not, but Lisa Maria has been back to promoting the restaurant recently after supposedly walking away from it a couple of years ago.  So with all the drama, it’s unclear as to where a couple of explicit photos of Lisa that popped up during the big leak came from.

When question online about the leak, Varon denied anything and basically put the heat back on Paige since she obviously had the scandal over a leak.  If you see the pics, it’s pretty obvious as to who we’re looking at, but one reason for the denial is that there are also rumors of “Victoria” making a return to WWE as part of WrestleMania 33.  If a return is indeed in the works, trying to get this whole thing to blow over is obviously in her best interest.

To see the leaked Victoria nudes, you can still view them on the Famous Board.